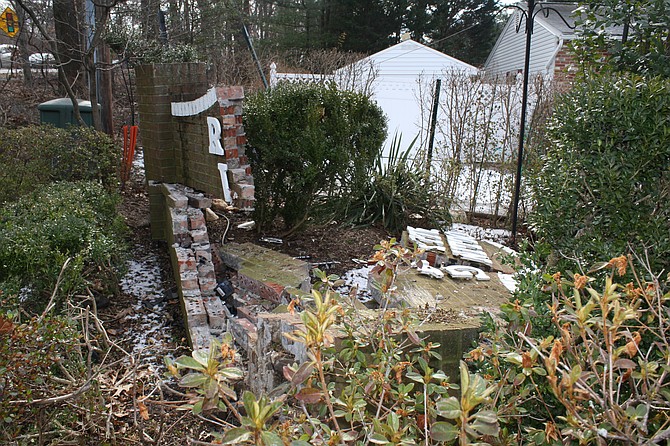 Sign is victim of driver error in Springfield. Photo by Mike Salmon.

Bob and Sue Erskine were sitting down to dinner on Friday, Feb. 1 when they heard a loud bang, followed by another bang just outside the front

window. Living on the corner of Rolling Road and Greeley Blvd., the accidents they’d heard don’t surprise them anymore, so they went out to investigate. A car had come off Rolling Road and hit the Rolling Valley monument sign, which was letters on a brick structure. “This was the first time anyone has come that far up,” said Bob Erskine.

“That’s the first one that ran into the sign,” added Sue Erskine, who went out with her cell phone camera just as it was getting dark. “The car was embedded in it,” she said.

Supervisor Pat Herrity (R-Springfield) heard about the crash and talked to the police who told him the car that hit the sign had gone through the stop sign on Greeley Boulevard. He does know it’s a challenging intersection, and has backed some measures to make it safer, such as the “painted lines to stop cars from going around,” he said.

The Virginia Department of Transportation (VDOT) is looking at widening Rolling Road and according to the presentation they gave the area residents in February 2018, this intersection will be rebuilt with a traffic signal and crosswalks. The $56.1 million Rolling Road project is scheduled to start in 2019 and will be done in two phases. Construction on Phase I will begin in fall 2019, and focus on the Old Keene Mill Road intersection. 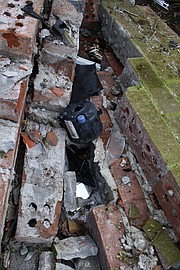 Car parts were left behind after the crash.

The Greeley Blvd.-Rolling Road intersection will be in Phase II, which “includes widening Rolling Road from two to four lanes between Viola Street and Old Keene Mill Road, signal upgrades, pedestrian and bike facilities and improvements to access management,” VDOT information stated. The whole project is scheduled to be completed in 2024. Herrity is trying to speed up the process and knows the challenges with Rolling Road in that area. “There’s a short sight distance, we’re straightening out the curve,” he said.

The Erskine’s have been to the VDOT meetings and know the plan for this intersection, but any action that will possibly alleviate the accidents is years away. They’ve seen the police on site, monitoring traffic and giving out tickets but it doesn’t seem to be helping. “People are impatient,” said Bob Erskine, and try to pass when cars are turning onto Greeley and there’s no room to pass on the shoulders. “I’ve even been hit there,” he said.