Bench and Accolades for Avid Gardener 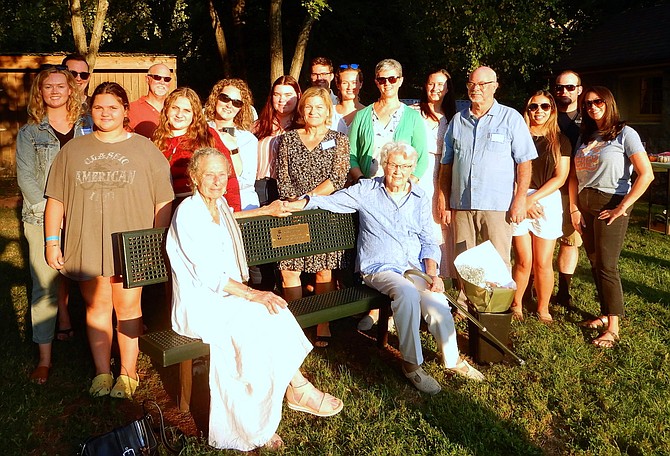 From left, Peggy Bier and Dolores Rooney sit together on the bench, with Rooney’s family gathered around them. Photo by Bonnie Hobbs.

Born Nov. 8, 1925, Dolores Rooney will be 97 in less than a month. But she looks way younger, is an avid, respected gardener and is still active in the local garden club she founded. And members of that club recently dedicated a bench in her honor in Chantilly’s Ellanor C Lawrence Park.

Some three-dozen people – including friends, garden club members and 14 members of Rooney’s family – gathered Sept. 19 for an early evening ceremony paying homage to her. It was a casual, lighthearted event, filled with laughter, reminiscences and joy – as well as a homemade buffet featuring a special cake, plus cupcakes decorated like sunflowers.

A few people addressed the crowd, and then Kathleen Whitman, a member since 2008, led a toast to Rooney. “She’s such a wonderful spirit,” said Whitman. “She really inspired me to slow down and enjoy the outdoors.”

Centreville Garden Club continues to thrive and bring in new members. Its community service includes caring for the gardens at Centreville Regional Library and supporting Manor Care nursing home with floral arrangements during the holidays.

Rooney worked many years with both silk flowers and fresh arrangements in the floral department of Merrifield Garden Center. And she’s a highly qualified and well-respected Floral Judge Emeritus, having judged numerous shows for the Chrysanthemum Society and the Rose Society.

She also judged floral competitions for the Rocky Run Garden Club, which still meets at Cabell’s Mill in E.C. Lawrence Park. And Ellanor Lawrence, the park’s namesake, was one of that club’s charter members.

So it’s only fitting, said DeFluri, that “We have the bench facing the mill where Dolores used to judge floral designs for the Rocky Run Garden Club. And the area around it will eventually be a garden.”

The dark-green bench is in harmony with its leafy surroundings in the park. And it bears a plaque reading, “In honor of Dolores Rooney, 2007 founder of the Centreville Garden Club; Floral Judge Emeritus.”

Delighted with this recognition of her many accomplishments in the realm of gardening and for the Centreville club in particular, Rooney said, “I’m astounded; I just can’t believe what you’ve all done. I really appreciate it.”

“It’s done my heart wonderfully to see people come from different places, work together and become friends [through this garden club],” she continued. “Friends are like flowers, and when you see [the individual] flowers in your garden, you remember who gave them to you. Thank you so much.”

Donna Heid, a 10-year member and past president of the Centreville Garden Club, was happy to be among those attending the ceremony. “Dolores has always been so kind and generous, sharing her knowledge with us,” said Heid. “And she invited us to her home in March for our Dig & Divide event, where we share plants with each other. I think this bench is wonderful and such a great tribute to her – we all love her dearly.”

DeFluri worked at E.C. Lawrence Park for many years, so she knew about Rooney’s expertise in gardening. Then in 2007, she learned that Rooney was starting a garden club. “Dolores first put up a sign in Ace Hardware, plus an interest notice in Centre View, to see if anyone wanted to join,” said DeFluri. “I joined in 2007-08.”

Noting that she has a Sheffield daisy from Rooney in her yard, DeFluri said, “She’s been such a leader for the garden club and is still active and participating – which is so inspiring. Dolores had us for tea, this spring, and she still gardens in her yard. We had a plant sale in early May, in front of the Stone Road Giant [in Centreville], and she worked at it in the pouring rain.”

Also pleased for Rooney was club member Trudy Harsh. “I think it’s wonderful,” she said. “It’s also appropriate because a bench is a place to rest in nature and appreciate the outdoors, which she loves. Dolores is a very giving person, and her knowledge of gardening is overwhelming. She gives us information that makes it even more fun.”

However, perhaps the person most overjoyed with Rooney’s recognition was her longtime buddy, Peggy Bier, who works at the Merrifield Garden Center in Fair Oaks. “I think she deserves that and a whole lot more,” said Bier. “Dolores and I have been friends and garden clubbers for 56 years, and she’s one fantastic lady. We had our families together, gardened together and did all the flower shows together.”

Rooney’s a longtime resident of both Vienna and Centreville. Her husband is no longer alive, but some 14 members of her family came to the dedication. “It’s really special that the Centreville Garden Club has chosen to honor her in this way,” said granddaughter Megan Rooney, a 2004 Westfield High grad. “As our grandmother, she’s always making beautiful flower arrangements. And she taught us about gardening and gives us baby plants from her plants. So it’s really sweet that this bench will be here as a tribute to her.”