Local historian is turning his collection and homegrown war lore into a book. 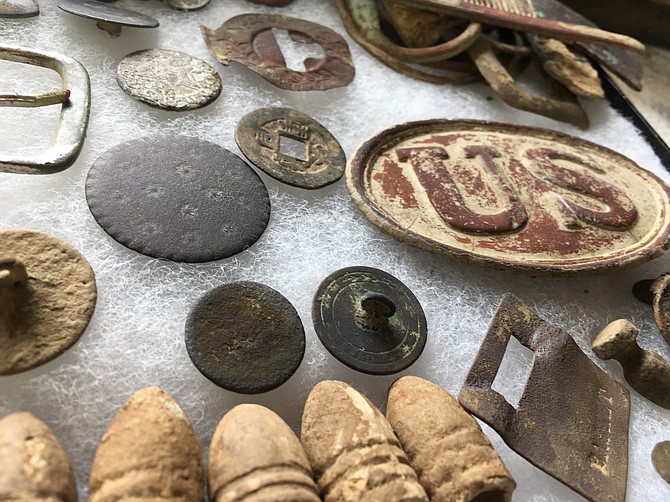 Local Civil War history is told partially through the relics, like these at the Winery at Bull Run, Photo by Mike Salmon.

When the Fairfax County Parkway was being built years ago, it was a gold mine for Jon Hickox and his metal detector. He started finding Civil War 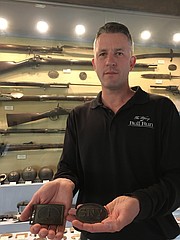 Jon Hickox with relics at the winery.

relics at the construction sites, learning what he could along the way. He is now an avid collector and local Civil War historian, in addition to being president at the Winery at Bull Run.

“I’ve learned by following in the footsteps of soldiers,” he said. “Most of the stuff I’ve found was days away from being covered with asphalt,” he said, pointing at a Union sword scabbard tip with ornate engravings. “I found that when they put in the Fairfax County Parkway,” he said.

Hickox is now working with fellow Civil War historian Chuck Murrow on a book about local Civil War stories that are handed down from generation to generation. “We’re trying to collect all those stories, which are the focus of this book,” he said. “We just started on it.” Chronologically, the book is starting in 1861, and moving forward to the First Manassas battle, the Winter Camps and the battle at Ox Hill. He predicts the book will take about two years to complete.

Hickox’s office at the winery looks like a Civil War museum. Guns, artillery shells, bullets and belt buckles line the walls, some with written descriptions from his research. A trunk off to the side was Captain Hearn’s who was with the 11th Mississippi, when war came and they had to leave in a hurry so it was left behind. Fast forward over 100 years, and the trunk was left behind in an attic. “His granddaughter was going to college in the 1950s and found it in the attic,” he said. “I bought a lot that’s been passed down,” he said.

There are several musket rifles that he found in creeks that are still intact surprisingly, and a bugle from a site in Manassas where they were building a gas station.

The capital of the Confederacy was in Richmond, and the Union operated out of Washington, D.C. so much of the war was fought in the 90 miles in between, he said. That included both battles at Manassas, Fredericksburg and many small battles in between so Fairfax County was frequented by both sides. “If you were going south, you had to go through Fairfax County,” he said. In the winter, the soldiers on both sides just hunkered down for a few months. The mud and cold made transportation difficult, so at some spots, there would be 10,000 men living in tents on a few acres, so these spots were littered with artifacts.

After the war, the farmers tried to get on with life, but the area was a mess. Many were trying to forget the horrors of war, so most of what they would find while plowing the fields was dumped in wells or “privy’s” which were the outhouses at that time. “They wanted the stuff gone,” he said

In the Winery dining area, the walls are lined with glass display cases, adding a certain charm to the place. After all, a place can’t be named “The Winery at Bull Run,” without having the Civil War be a part of it. One relic tray was full of buttons, bullets and belt buckles they found when building one of the porches on the main room at the winery. There is an 1820 breast plate that “was found by George Mason University, we think it was used by the Alabama soldiers,” he said.

He tracks all the different infantry divisions through the relics and learns what company was where throughout the campaign. The volunteer Maine Militia went through the area, and Hickox got a diary of one of the soldiers, and found out they used their initials, VMM, to also stand for Very Mean Men jokingly. With the belt buckles, soldiers collected them and reused them as functional trophies of war, Hickox said. Sometimes the Confederate soldiers “wore them upside down,” as an anti-Union statement, he said of the US belt buckles.

The artillery shells Hickox found could be lethal too because of the explosives they contain. Even if they are found in a creek, the gunpowder may 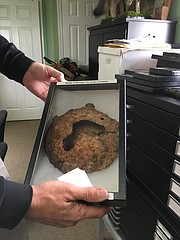 A rusted out canteen from the Civil War in Virginia.

still be inside, so Hickox works with a man in Richmond to disarm them, doing all the drilling underwater to minimize the chance for sparks.

Not everyone is supportive of relic hunting and some believe they should just leave the stuff in the ground as a silent memorial, which Hickox agrees with in cases of national parkland or private land. A button won’t survive forever in the ground though, and the lesson that could have been learned will be lost if it deteriorates completely. “Without these things being saved, we don’t know who was there,” said Hickox. Preserving these items is “rescuing history from construction sites,” he said.