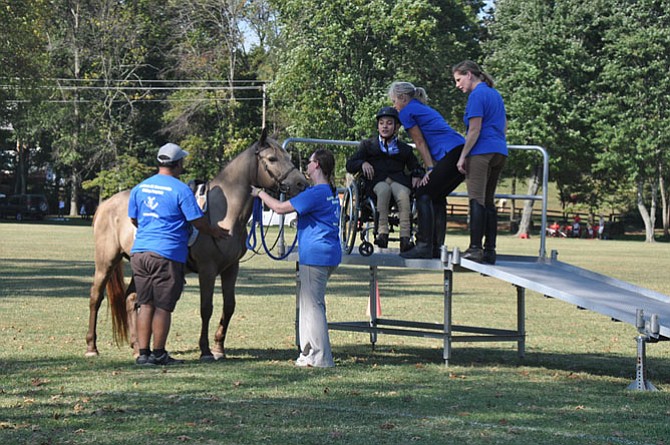 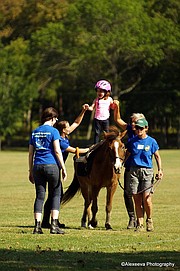 From left, Eileen Lavelle, Olivia Taylor, Josslyn Marrion, Patti Towlsey (walking in the back) and Claire Dudley demonstrating an assisted walk at the 2015 NVTRP “Ride to Thrive Polo Classic” fundraiser.

NVTRP executive director Kelsey Gallagher (right) of Warrenton poses with therapeutic riding pony “Teddy” at the nonprofit’s farm in Clifton. Teddy will deliver champagne to VIPs at Saturday’s “Ride to Thrive” event, and has a signature cocktail “The Theodore” named in his honor.

Once a week for the last seven years, César Dulanto of Lake Ridge, Va. has come to Clifton to trade his wheelchair for a saddle.

Dulanto, 13, has been been wheelchair-bound since the age of two with cerebral palsy. He used to have difficulty just sitting up in a chair. And, he said, “I used to be so shy.”

But on Saturday, Sept. 17, Dulanto will not only demonstrate how he’s able to mount a horse from his chair, grabbing the saddle and pushing himself up with greater core and arm strength than he’s ever had. He’ll also show off numerous riding skills he’s acquired through the Northern Virginia Therapeutic Riding Program.

And he’s going to share some of his story in front of hundreds of people.

The NVTRP is hosting its tenth annual major fundraiser “Ride to Thrive Polo Classic” on a private estate at Chetwood Park in The Plains, Va.

The non-profit organization hosts as many as 110 riders -- children and adults with disabilities, at-risk youth and recovering military personnel -- in seasonal sessions, providing therapeutic riding, hippotherapy and an opportunity to develop or re-learn life skills in an open, peaceful environment.

“It’s a chance for us to bring our horses out, not just another black-tie gala,” said executive director and Warrenton resident Kelsey Gallagher.

THE AFTERNOON AFFAIR in the country will include a live polo match with several professional players and amateurs beginning at 3 p.m., live and silent auctions, a carriage exhibition by the Piedmont Driving Club and demonstrations by several of the NVTRP clients, including Duranto.

“It’s showing what everybody’s supporting,” said Debbie Nash, who helps coordinate the polo match and will compete in the match herself, along with her husband.

“You go there and see where the money’s going, how it’s benefiting,” Nash said. “That’s the big thing, actually seeing it in person, how they even get on the horses, the whole procedure.”

Another demonstrator will be Jack Taylor, 9, of Falls Church. Taylor can walk, run and play, but has issues with balance, awareness, and some walking and talking because of right hemiplegia, a paralysis of half of his body.

Taylor’s parents Don Taylor and Julia Meehan had never tried anything like therapy on a horse before moving to Falls Church in 2013. They started at NVTRP the same year.

“He gets an emotional benefit as well, he’s excited to share his hobby -- not everyone does it,” said Meehan.

“We feel really lucky he’s a part of it,” Taylor’s dad said. “He thinks of it as fun, not therapy.”

The couple also takes their son to occupational and physical therapy each week, but said the traditional exercises can get repetitive and aren’t interesting for a child.

At NVTRP, Jack can work on improving his functionality, and “as a way to build skills and interest in something,” Meehan said.

One of the reasons horses are so effective as therapy animals, both for physical and emotional development, Gallagher said, is the way they interact with people around them, their riders.

“It’s self-actualization,” she said, “horses mirror what you give off.”

Many military personnel, Gallagher explained, come in with issues related to post-traumatic stress disorder. They can have difficulty controlling anger or anxiety -- both of which make it difficult, if not impossible to connect with and mount a horse.

Working with the horses, needing to calm down before seeing any success, “brings these soldiers out of themselves,” Gallagher said, “gives them a sense of peace.”

“It’s saved marriages, lives,” she added. “This is what it’s all about.”

Started in 1980, NVTRP now occupies a 17-acre farm at the corner of Clifton and Popes Head Roads. Despite fielding a team of roughly 200 volunteers each week to help with maintaining the horses and assisting the Professional Association of Therapeutic Horsemanship International (PATH Int’l) Certified Riding Instructors with lessons, Gallagher says there’s a two-year waiting list to get in.

THEY HOPE to increase their capacity with a new indoor riding ring, for which Fairfax County has recently approved the site plan.

To continue their work and begin to finance the new ring, Gallagher is hoping to improve on the $107,000 gross the Ride to Thrive event raised last year.

For more information, visit nvtrp.org/polo-classic. Tickets for the Polo Classic will be available until Friday evening the night before the event.