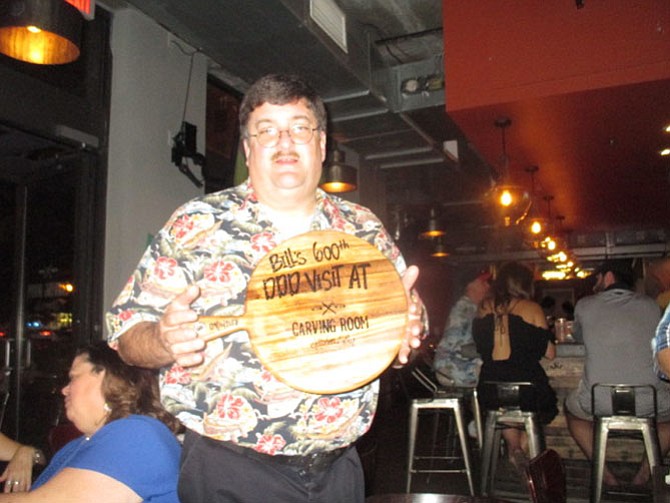 Bill Grella has seen a lot of the country — from the inside of restaurants out. From west to east, north to south, he’s visited dozens of states and dined at literally hundreds of cafes and eateries — all featured on the Food Network show “Diners, Drive-Ins, and Dives,” starring Guy Fieri.

“I’ve been from Maine to Florida to Hawaii, to places in between,” Grella said.

And he’s just getting warmed up.

On Saturday night, Grella — a Fairfax native and Leesburg resident — stuck relatively close to home while he marked his 600th visit to a restaurant featured on “Diners, Drive-ins, and Dives,” venturing just across the Potomac River to Washington for a meal at The Carving Room.

That’s right – 600. Six hundred visits to eateries featured by Fieri, ranging from barbecue joints to food trucks to all manner of other cuisines.

Grella started his quest in 2008 with a visit to The Village Café in Richmond, near the campus of Virginia Commonwealth University, and before he knew it, the expeditions began to grow. Soon, he was delving deeper into researching potential spots to visit — and then making the trips happen.

“I just started going to more and more places — in fact, any time I would travel I’d look up first on the Food Network website — they used to keep a really good listing of all the places,” Grella said. Now, he and like-minded foodie adventurers use third-party sites such as FlavortownUSA.com to catalogue all of Fieri’s selections and plan trips accordingly.

And Grella is decidedly not alone in his adventures. Scope out any of the show’s fan sites and you’ll find quite a few Fieri followers, some with hundreds of restaurant visits under their belts. But no one Grella knows has hit his own personal records just yet, he says.

And he’s seen some great sights.

“I’ve been able to see a lot of the country that I probably wouldn’t have had any inkling to go to (otherwise),” he said. “Just last month, I went to Louisville — I’d never been to Louisville before — and went to the six places [Fieri has featured].”

In terms of the food, Grella says he’s enjoyed quite a few memorable meals.

“My favorite meals have been up at the Maine Diner [in Wells, Maine] – lobster pie, which was unbelievable,” he said. “There’s a place down in Dallas which is called the Pecan Lodge – it had some of the best brisket I’d ever had.”

Other favorites from the past 600 visits: Hillbilly Hot Dog in Huntington, W. Va. (“It looks like a really bad yard sale out front,” Grella chuckled) as well as Sip & Bite just up the road in Baltimore (“Guy calls the owners The Lucy and Ricky of Flavortown”).

After capping off his latest milestone last weekend, Grella says he has no plans to stop his foodie adventures.

“Every time I get to a milestone, I say I’ll slow down, but something always pulls me back,” he said.